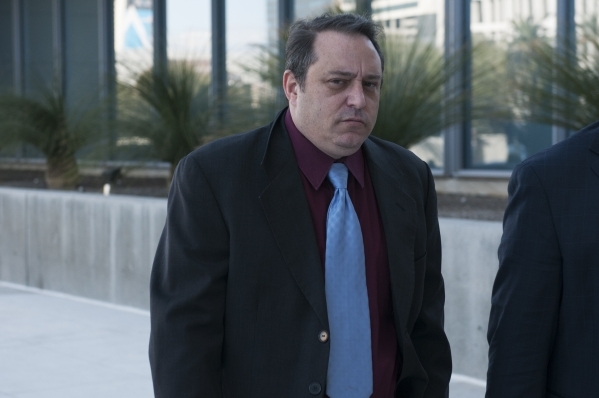 Suspended attorney Barry Levinson arrives at the Lloyd George U.S. Courthouse in Las Vegas on Feb. 3, 2014. Levinson, a convicted player in a scheme to defraud homeowners associations, was sentenced a second time on Thursday, this time for stealing more than $1.1 million from his clients. Erik Verduzco/Las Vegas Review-Journal 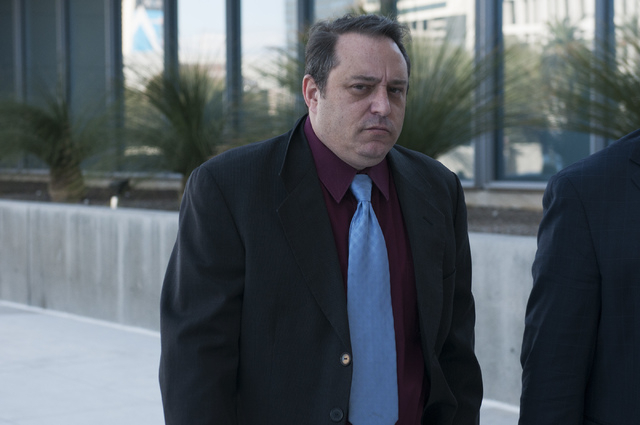 Attorney Barry Levinson arrives to Lloyd George Federal Courthouse in Las Vegas for his HOA investigation case Monday, Feb. 3, 2014. Levinson is charged with the theft of more than $1 million from his clients. (Erik Verduzco/Las Vegas Review-Journal) 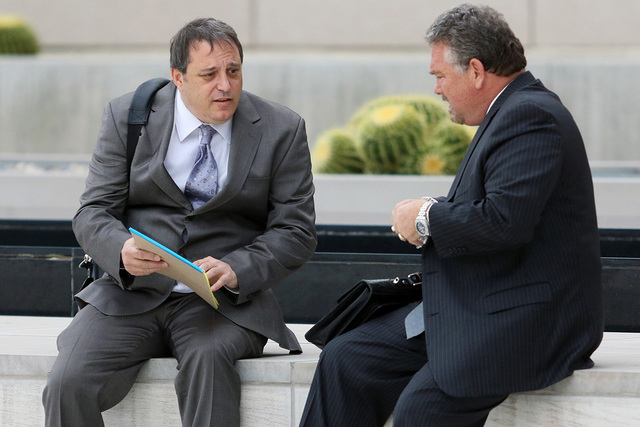 Local attorney Barry Levinson, left, speaks with his attorney Brent Bryson before going into Lloyd George U.S. Courthouse for sentencing Friday, May 22, 2015, in Las Vegas. Levinson is charged with HOA fraud and other criminal counts, including stealing from his clients. (Ronda Churchill/Las Vegas Review-Journal)

Suspended attorney Barry Levinson, a convicted player in the scheme to take over and defraud homeowners associations, was handed a second stiff prison sentence Thursday, this time for stealing more than $1.1 million from his clients.

District Judge Michael Villani called Levinson’s actions “despicable” and sentenced him to at least eight years in prison to run consecutively to a 6½-year federal sentence Levinson received for his role in the massive HOA scheme.

Villani ignored a plea agreement, worked out by defense lawyer Brent Bryson and Chief Deputy District Attorney J. P. Raman, that called for a minimum of two years in prison to run concurrently to the federal sentence.

The judge also ordered Levinson, who pleaded guilty to four felony theft charges, to pay $1.1 million in restitution to his clients.

Then Villani ordered Levinson — who was free until Thursday — handcuffed and immediately taken into state custody.

Afterward, Bryson said he was “shocked” by the sentence and was considering options to get it reduced.

Levinson, 48, who has more Nevada bar complaints against him than any other lawyer, was supposed to surrender to federal prison authorities Aug. 21. Federal authorities now may have to ask a judge to transfer Levinson into their custody next week.

Villani decided not to go along with the lighter sentence recommended in the plea agreement after listening to horror stories from some of Levinson’s clients in court.

“This was an unfortunate house of cards that just collapsed on everybody,” Villani said. “This is despicable.”

An emotional Levinson appeared to show remorse, apologizing for his “bad choices” and saying he was “embarrassed” by his actions.

“Since the HOA stuff, I don’t think there’s been a day when I don’t get up and cry,” he told Villani.

But some of his former clients didn’t buy Levinson’s remorse and urged Villani to be tough on him.

Laury Marlow told the judge the man she heard in court was not the one who stole $75,000 from her when she came to him to sue a nursing home over the death of her mother.

“This man has devastated the lives of many people,” Marlow said.

Levinson’s greed not only cost her financially but forced her to prolong her grief over the loss of her mother, she said.

Angela Kennedy tearfully said Levinson put her into financial hardship when he stole $50,000 from her.

“What you took from me and my family, we can never get back,” she said.

Levinson was accused of stealing money from lawsuit settlements from January 2007 to July 2012.

The State Bar of Nevada has said it received 124 grievances against Levinson in recent years, more than it has received about any Nevada lawyer.

Levinson agreed to permanent disbarment as part of his federal plea deal, but the Nevada Supreme Court has yet to act on it. The high court suspended Levinson in 2012.

Federal prosecutors said Levinson betrayed the trust of homeowners as general counsel for the Park Avenue HOA board. His real loyalty was to the scheme’s central figure, former construction company boss Leon Benzer, who was seeking a lucrative contract for construction defect work.