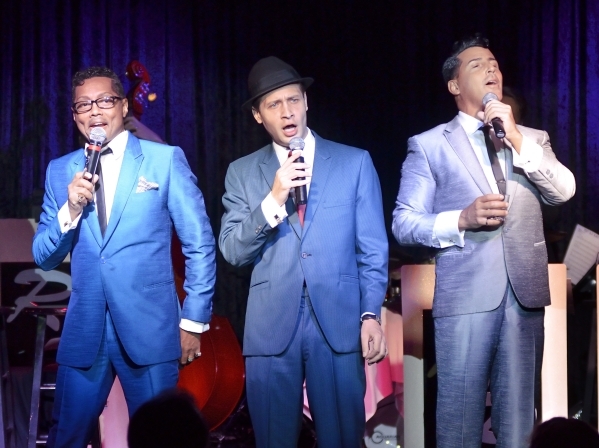 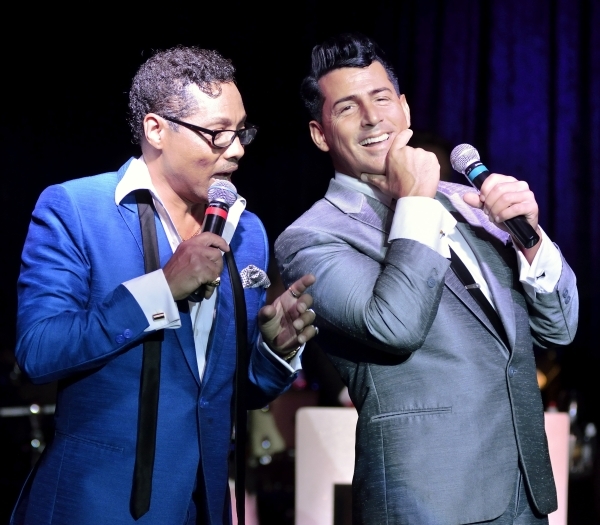 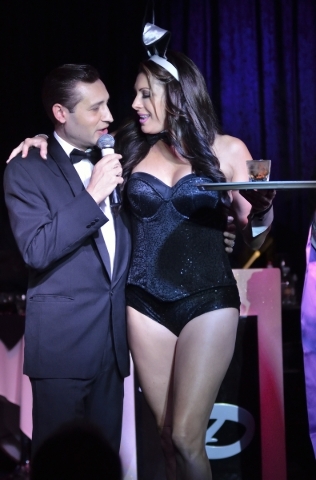 Frank Sinatra (David DeCosta) cozies up to a Playboy bunny (Joelle Righetti) during "The Rat Pack Is Back." (Bill Hughes/Las Vegas Review-Journal)

It’s not the talent, it’s the tumult.

“Tumult” is the oddly perfect word that Las Vegas legend Keely Smith once used to pinpoint the magic of the old Las Vegas.

Everybody knows there is nothing on the modern-day Strip that is in any way comparable to the Rat Pack. But be specfic: What exactly is it that’s missing? Keely and the durable tribute “The Rat Pack Is Back” help us pinpoint it.

The show evolves and adapts, this time to a cozy cabaret venue at the Tuscany. (The show’s tradition for dinner in the room has been modified to a worthwhile prix-fixe menu option at the adjacent Tuscany Gardens restaurant.)

What’s not in this version may be as revealing as what is.

Quickly, for the uninitiated (and would the uninitiated even care at this point? Hold that thought): “Rat Pack” has been around since 1999. The cast and script change, but the concept doesn’t. The show, more scripted than you might think, aims to rekindle the magic of the early ’60s teamings of Frank Sinatra, Dean Martin and Sammy Davis Jr. that started with the “Summit at the Sands” in early 1960.

Each passing year makes it harder for those of us who weren’t around to imagine the excitement of seeing three stars at the top of their pre-Beatles, pop-culture dominance. And the tribute show can’t help us a lot there: We either care enough to buy a ticket and use our imagination or we don’t.

Recordings of the old Rat Pack shows suggest the Copa Room was a bit frustrating for those who actually came to hear Frank or Dino sing; the crooning was mostly jokey toss-offs, frequently interrupted. The real reward was in the banter, the interplay, and just being in the moment.

“Rat Pack” takes that cue, wisely, given the limitations of its cast and surroundings. The show does play pops concerts with orchestras across the country. But in this lounge version, a song or two was plenty from three guys who look way more like the stars than sound like them.

On this night, Nick E’Egidio sounded so little like Sinatra it was almost uncomfortable (David DeCosta is now in the role; cast members rotate between Las Vegas and outside bookings).

Drew Anthony looks astonishingly like a young Dino but still hasn’t nailed Martin’s languid timing, in either the musical phrasing or joke delivery.

Kyle Diamond comes the closest to the essence of Davis and his sparkle in what is usually the hardest of the three roles to cast. But his singing is not as formal and powerful as the real deal either.

Does any of it matter? Not for long.

The songs are helped along by David Perrico’s energetic new arrangements for Lon Bronson’s seven-piece band with four horns. And guess what? It takes only about 20 minutes to turn the corner from bad karaoke to, what’s that word again? Oh yeah, tumult.

What both the Rat Pack and “Rat Pack” offer that modern Vegas is missing is that sense of getting reeled in, swept along with a good comedic roll. One crack after another, whether it’s custom song lyrics (“Fly me to your room …”) or booze jokes. Lots and lots of booze jokes. (Dino’s new whiskey diet: “In one week I lost three whole days.”)

Authentic Rat Pack moments, such as Sammy and Frank doing “Me and My Shadow,” mix in with anachronistic songs (“Candy Man” came later for Davis) and jokes about Bill Cosby and Caitlyn Jenner. Miraculously, the show sneakily loses more of the old racist Sammy jokes with each iteration.

Producer Dick Feeney has been the constant guidepost for a title with a convoluted and litigious history of creators and performers. Repeat customers are more likely to notice there’s no Joey Bishop character this time; the comedian’s role was inflated during the years the show featured Sandy Hackett.

And a Marilyn Monroe bit that always seemed a little forced is now covered just as well by Joelle Righetti as a Playboy bunny.

So, back to that question about the uninitiated. For real insight into Sinatra’s enduring appeal, try Bob Anderson’s “Frank — The Man. The Music.” But if you want to see why people remember this town as being so much fun, well, pull up a booze cart and pay attention.

Read more from Mike Weatherford at bestoflasvegas.com. Contact him at [email protected] or @Mikeweatherford

Review-Journal entertainment columnist Mike Weatherford looks back at the Vegas show scene in his farewell column.

The tour is called “Us + Them” for reasons made very clear. But Roger Waters’ tour stop Friday at T-Mobile Arena also seemed at times to alternate between “us” and “him.”

Comic legend witnessed classic Vegas shows, and his Broadway show ‘The Producers’ played here. But Wynn Las Vegas shows will be his first on stage.

‘Sex Tips’ is good-natured, but needs to learn to relax
By Mike Weatherford / RJ

Comedy based on how-to manual is amusing and good-natured, but works too hard for middling laughs.

Veteran variety-show comedian is back on stage only seven months after career-threatening injury.

Working a comedy club setting without a band requires the manic master of song parodies to recalibrate.

A lot of people are waiting for the showgirl to make a comeback. But Grant Philipo is less patient than most.

An outdoor concert venue and a recent comedy festival both expand the diversity of ticketed entertainment downtown.

They’re so old school, even the signs for Clint Holmes and Frankie Moreno inside the Golden Nugget seem like holdovers from another Las Vegas: “Dinner and a show, $35.”