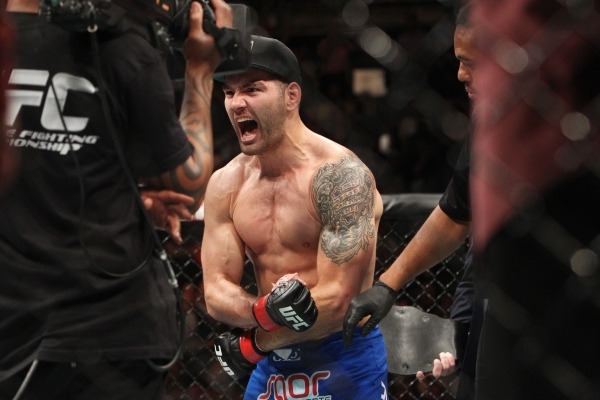 Chris Weidman celebrates his victory over Vitor Belfort after their middleweight title fight at UFC 187 Saturday, May 23, 2015, at the MGM Grand Garden Arena. Weidman retained his title with a first round TKO and remains undefeated. (Sam Morris/Las Vegas Review-Journal) Follow Sam Morris on Twitter

UFC middleweight champion Chris Weidman will defend his belt against Luke Rockhold in the co-main event of UFC 194 at MGM Grand on Dec. 12.

Weidman last fought in May when he knocked out Vitor Belfort in the first round of the main event at UFC 187 to retain the title. He is 13-0 in his career with only four fights having gone the distance.

Rockhold has won four consecutive fights with the last three coming by submission. He submitted Lyoto Machida in the second round of an April fight to solidify his spot as the top contender.

The event will be headlined by a featherweight title unification bout between champion Jose Aldo and interim champ Conor McGregor.