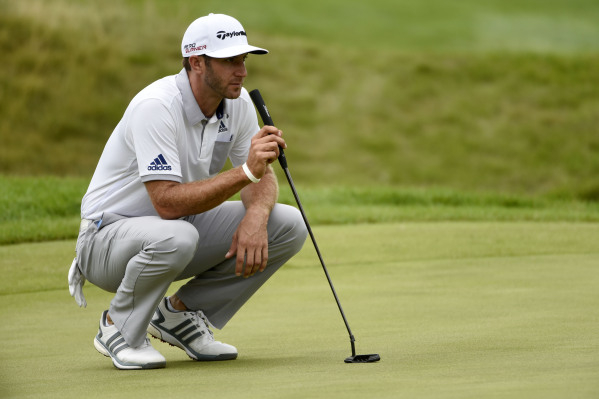 Dustin Johnson lines up a putt on No. 18 during the first round of the PGA Championship on Thursday in Sheboygan, Wis. He leads after a 6-under 66. MICHAEL MADRID/USA TODAY 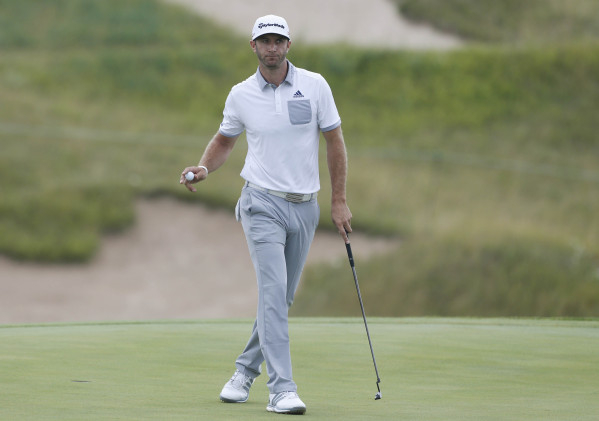 Dustin Johnson acknowledges the crowd after making a putt on No. 10 during the first round of the PGA Championship on Thursday in Sheboygan, Wis. He leads after a 6-under 66. BRIAN SPURLOCK/USA TODAY

If majors continue to slip from his grasp, Dustin Johnson will be stuck with the label of a career underachiever. The critics will say he squandered his immense talent, that he never could win the big one.

All of that would be true, but it’s way too soon to say it. Johnson is probably going to win a major at some point, and that point might be this weekend. If not, at least he deserves credit for continuing to be a contender.

He has that and Paulina Gretzky, his fiancee, to his credit right now, and most guys would be satisfied just to get some time with her.

Johnson is the leader after Thursday’s first round of the PGA Championship, but what does it mean? He stormed out of the gate in the U.S. Open and British Open this summer, too, only to fade down the stretch. What this means is he has a third chance to get it right.

“I think he’s going to be there at the end, I really do,” said Nick Bogdanovich, William Hill sports book director. “I don’t think he’s going to crumble like he has been known to. He’s relaxed. He likes this track. I’m not saying he’s winning it, but he will definitely be part of the mix.”

The year’s final major ranks a distant fourth in terms of interest and wagering handle. The Masters is the most prestigious and attracts the most betting action. The PGA, for a majority of the public, represents the end of the golf season. But it counts equally as a major, and it’s an opportunity for the best players never to win one — a class including Jason Day and Rickie Fowler — to finally break through.

Johnson is 31 and 0-for-26 in majors. Although he’s still young, the clock is ticking and the 0-for-majors eventually becomes a big burden to carry.

“It’s going to be compelling to see if Johnson can hold it together,” Westgate Las Vegas golf oddsmaker Jeff Sherman said. “There are a lot of good storylines after one day.”

Win or lose, Johnson is in position to be the top story. He opened by firing a 6-under-par 66 at Whistling Straits in Wisconsin, where the wind picked up in the afternoon and caused most scores to rise. Johnson was fortunate to go out after breakfast.

“It was great he got out early, caught the (good) weather and took advantage of it,” Bogdanovich said. “We had more tickets on him than any other player. I don’t know why that is.”

Johnson, who blew up in the final two rounds of the British Open, did not arrive at Whistling Straits in top form. He closed at around 15-1 odds, behind Jordan Spieth, Day, Rory McIlroy and Bubba Watson. But on a course that favors the longest drivers, Johnson figured to contend, and he’s setting the pace in the horse race at the first turn.

After one round, Johnson is the PGA favorite on the adjusted odds boards — 4-1 at the Westgate and 5-1 at William Hill. Day, two strokes back in an eight-way tie for third, is the second choice at 6-1.

“Day led our final ticket count,” Sherman said. “Day and Spieth are still in position to make a charge. Most people probably expect Johnson to fade. Is Day going to break through this time? It should be really interesting.”

Spieth, winner of the year’s first two majors, and McIlroy, returning from a left ankle injury, each shot a 1-under 71 in more challenging weather conditions. Spieth has been adjusted from the 6-1 favorite to 7-1, and McIlroy is now 7-1 at William Hill and 10-1 at the Westgate.

“McIlroy played a lot better than I thought he would. He hit it really pure,” Bogdanovich said. “It’s a star-studded leaderboard and it’s wide open.”

Watson, my pick to win, was a falling first-day star. He shot par and slipped from 12-1 to 30-1 odds. But in recent tournaments, Bubba has been a slow starter and a final-round closer, so don’t count him out. Justin Rose, another player I bet, is three shots off the lead and quietly in the hunt.

The major surprise was David Lingmerth, a 5-foot-7-inch swinger with the physique of a pro bowler. A 100-1 shot at closing time, Lingmerth trails Johnson by one and has been adjusted to 15-1. He beat Rose in a playoff at the Memorial Tournament in June.

“There was plenty of money for Lingmerth,” Bogdanovich said. “The regular Joe might not know Lingmerth, but all the bettors know him.”

It’s far from over, but former UNLV star Adam Scott and Henrik Stenson are done, each at 4 over and shooting themselves out of it. Tiger Woods, never expected to be in it, is 3 over and 300-1 on the adjusted odds board. The betting public finally grew wise to Tiger’s lies about seeing progress, and he barely drew a sniff of interest at 50-1.

“Obviously, no one expected much out of Tiger,” Bogdanovich said. “He’s still trying to find himself. It will be interesting to see if he makes the cut. That was a good two-way betting prop.”

Woods closed as a slight favorite (minus-120) to make the cut, and bettors on both sides of the prop will be watching closely as he walks the cut line in Friday’s second round.

“If you want to take a flyer coming from the pack, I would say Justin Thomas and Brooks Koepka might be live,” Bogdanovich said. “All sorts of good stories.”

J.B. Holmes and Danny Lee would be good long-shot stories, too. But Johnson is the headliner, whether he finally wins it all or again walks away with nothing.

The Buffalo Bills went to four straight Super Bowls yet are rarely hailed as one of the NFL’s great teams of the 1990s because they lost all four.

Johnson just needs one major win to quiet his critics and rewrite that line about being a career underachiever.

Las Vegas Review-Journal sports betting columnist Matt Youmans can be reached at [email protected] or 702-387-2907. He co-hosts “The Las Vegas Sportsline” weekdays at 2 p.m. on ESPN Radio (1100 AM). Follow him on Twitter: @mattyoumans247.

After five consecutive wins, the Green Bay Packers (9-6) are headed for Detroit to knock on the door in search of the NFC North title.

It’s seldom wise to bet against Nick Saban in a big game. But the line on the Peach Bowl has dipped to Alabama minus-13½ against Washington.

Dallas (12-2) has clinched the top seed in the NFC. Detroit (9-5) can lock up at least a wild-card spot by beating the Cowboys on Monday night.

A rematch of the past two NBA Finals highlights Sunday’s five-game schedule. Kevin Durant and the Golden State Warriors are 2½-point favorites at Cleveland.

The Colts, a mysteriously popular bet to win the Super Bowl, were eliminated from playoff contention in a 33-25 loss to the Oakland Raiders.

Ben Roethlisberger, Steelers revved up for revenge, but it’s no easy task
By MATT YOUMANS / RJ

The underdog Ravens have had the best of this AFC North rivalry recently, winning four in a row and six of the past seven meetings with Pittsburgh.

UCLA, 13-0 and ranked No. 2, represents the biggest surprise of the college basketball season. The Bruins’ odds to win the national championship were posted at 50-1 in early November.

The Raiders, 10-3 and smelling a playoff spot for the first time in 14 years, are 3-point favorites at San Diego. Philip Rivers and the Chargers (5-8) are fading again.

Joe Flacco and the Ravens are 7-point underdogs at New England on Monday. Baltimore has won and covered four of its past five games.