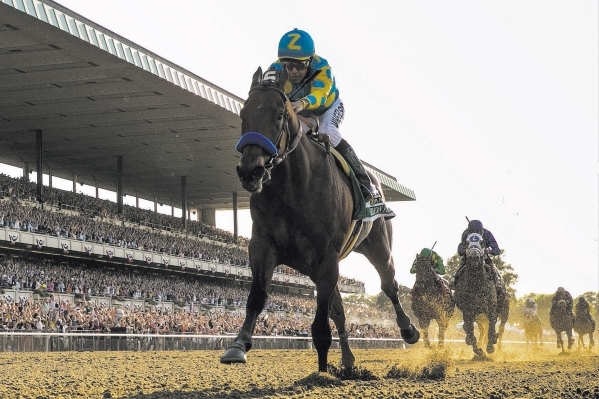 Jockey Victor Espinoza, aboard American Pharoah, passes the finish line to win the 147th running of the Belmont Stakes as well as the Triple Crown, in Elmont, New York June 6, 2015. REUTERS/Lucas Jackson TPX IMAGES OF THE DAY

Each weekend in August seems to have a horse racing life of its own. First it was the Haskell at Monmouth Park, where American Pharoah made a triumphant return off winning the Triple Crown.

Next week is the Pacific Classic at Del Mar, followed by the Travers at Saratoga, where American Pharoah is tentatively set to run again.

Outside of the Breeders’ Cup each fall, you will not see a larger group of foreign horses shipped to this country.

Six of the 13 horses entered for the Arlington Million are from Europe. The Euros were unlucky, as four of them drew the worst outside posts in the 1Â¼-mile turf race.

The race favorite will be Big Blue Kitten (3-1) from the New York barn of trainer Chad Brown. He won the Grade 1 United Nations Handicap last out at Monmouth Park. Joe Bravo will ride.

The second choice is Slumber (7-2), who has a budding rivalry with Big Blue Kitten. Two races ago, Slumber upset Big Blue Kitten in the Grade 1 Manhattan, but their roles were reversed in the United Nations. Irad Ortiz Jr. will ride.

My upset pick is Wake Forest (12-1), who ships in from Germany for trainer Andreas Wohler. The 5-year-old horse will race on Lasix for the first time. Stable rider Eduardo Pedroza is up. If you’ve never heard of Pedroza, he has been a four-time champion jockey in Germany.

The Beverly D is for fillies and mares. The field starts with returning winner Euro Charline (5-2). She won the race last year at 10-1 odds, but will be a solid choice Saturday. She was pointed for this race by owner Team Valor and appears ready for another top effort.

If there were an upset, I would lean to Wedding Vow (4-1) from superstar trainer Aidan O’Brien. Champion rider Colm O’Donoghue will ride.

Wedding Vow ran second in the Group 1 Qatar Nassau Stakes at Goodwood last out. She will run on Lasix for the first time, too. If you get a chance, watch the race replay, as she has an amazing late kick that is more common with the top European runners.

Last is the Secretariat, restricted to 3-year-olds. The favorite is Force the Pass (2-1) off a sharp win in the Belmont Derby. Joel Rosario will ride for trainer Alan Goldberg.

However, this might be the Euros’ strongest group in Highland Reel (5-2), War Dispatch (4-1) and Goldstream (9-2). I would not be surprised to see anyone of these three colts win.

If I had to pick among the trio, I’ll take Highland Reel, also from the aforementioned O’Brien barn. Stable rider Seamus Heffernan will ride.

Highland Reel is actually cutting back in distance after winning the 1½-mile Group 3 Gordon Stakes at Goodwood. He has a grinding style in which he likes to sit midpack, then kick it in late.

One thing to watch for, too, is the riding styles of the jockeys. American riders try to ride flat, parallel to the ground, as if you could rest a drink on their backs. European riders sit more upright because of the uneven courses overseas.

Richard Eng’s horse racing column is published Friday in the Las Vegas Review-Journal. He can be reached at [email protected] Follow him: @richeng4propick

Irish War Cry due for good race, pick to win Belmont
By Richard Eng Special to the / RJ

Today the trend is for racetracks to cluster their stakes in a festival-style program. Thus, the Met Mile will be among nine graded stakes on the Belmont Stakes card June 10.

Always Dreaming is the horse the racing industry will be rooting for. A win in the Preakness sets up another Triple Crown chance in the Belmont Stakes on June 10.

After Always Dreaming crossed the finish line first in the Kentucky Derby, the first question was, “Is he good enough to win the Triple Crown.”

Many experts are calling this the most wide-open Kentucky Derby in years. When I hear that, I get cynical. Wide open was in 2009 when Mine That Bird destroyed the field at 50-1 odds.

The Kentucky Derby attracts the most novice and casual bettors of any race in our sport. With that in mind, there are all kinds of free Derby seminars next week.

I love making future bets, not only in horse racing but also other sports. That’s because horseplayers learn a basic tenet early on. Our goal is to bet a little to win a lot.

The long and winding road to the Kentucky Derby ends Saturday with the $1 million Arkansas Derby at Oaklawn Park.

When the folks at Churchill Downs dreamed up the Kentucky Derby points system, I was skeptical at first. Not anymore. It has worked by producing fields of in-form horses that, for the most part, are also bred to race two turns.