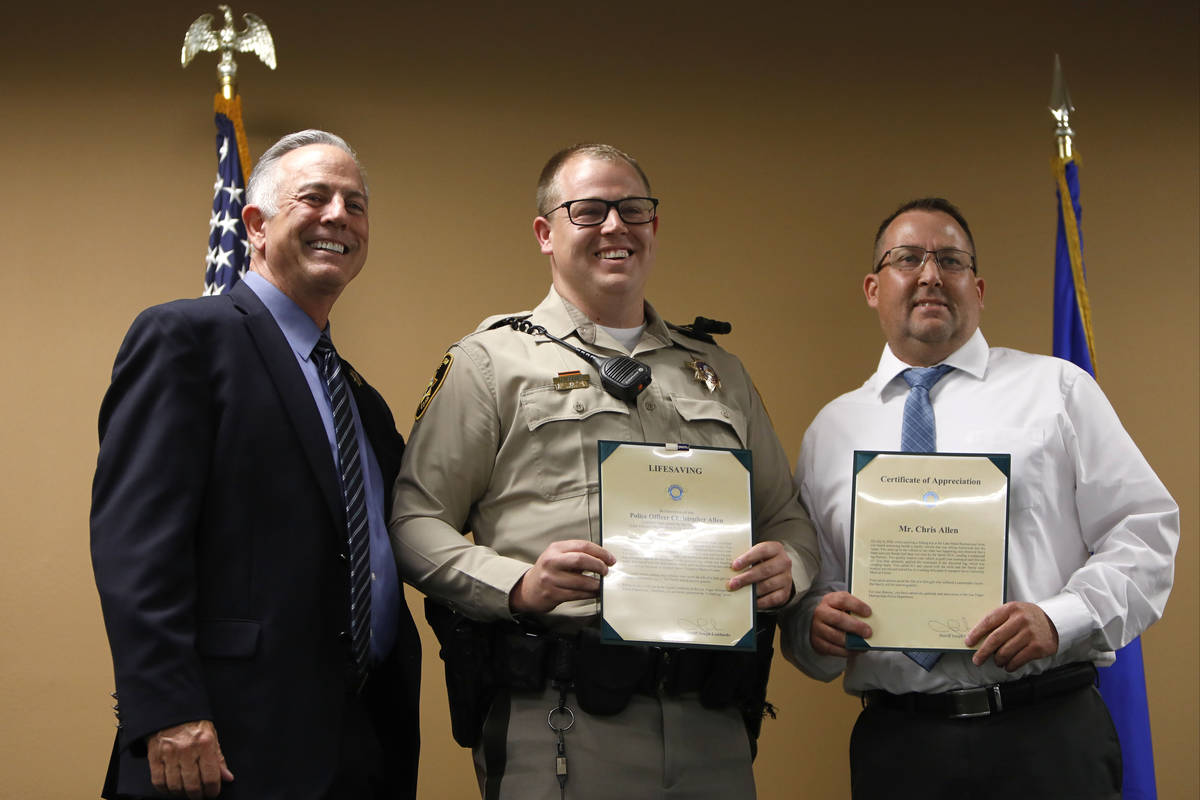 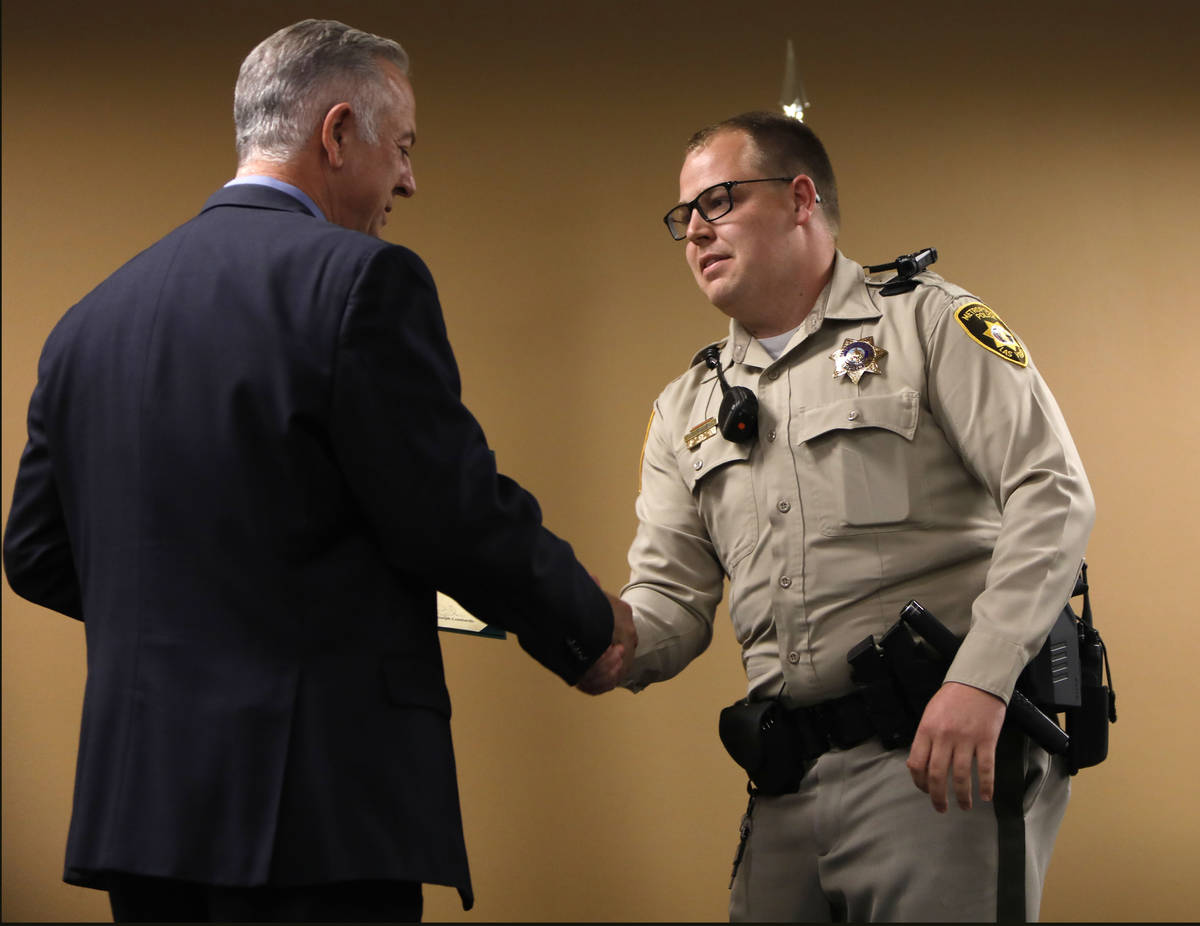 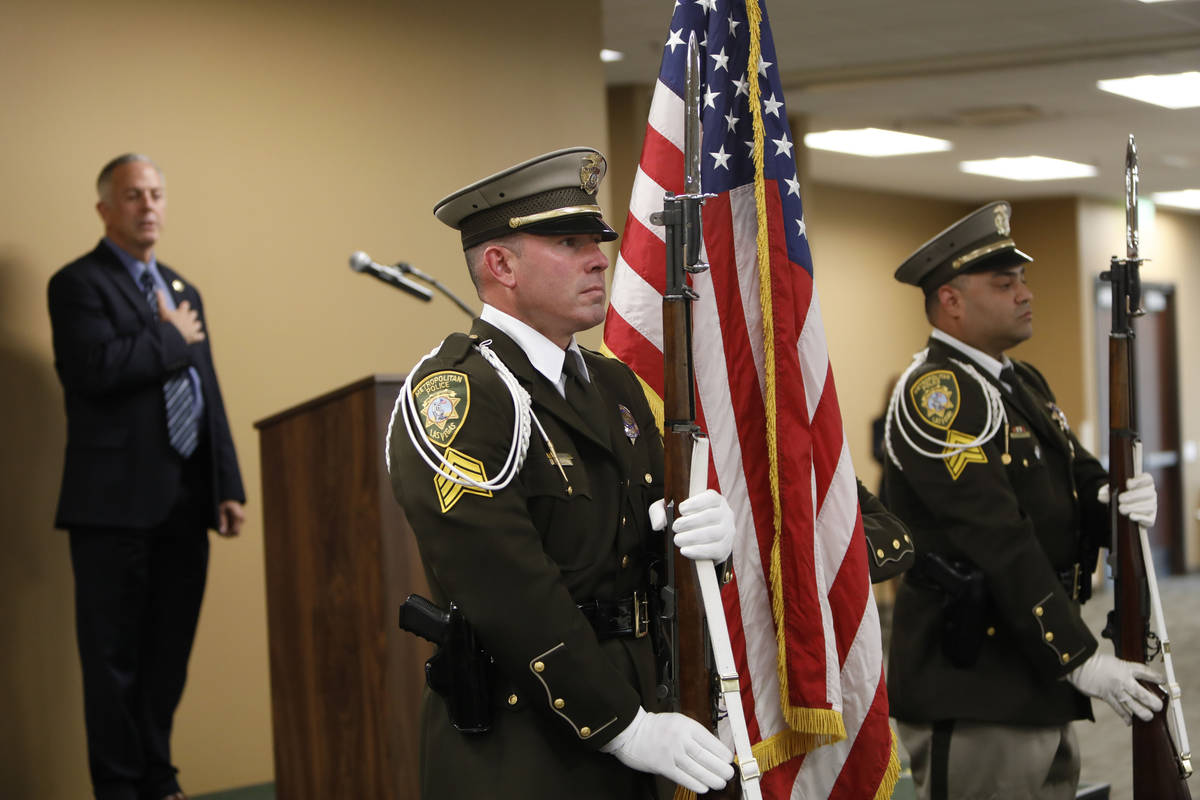 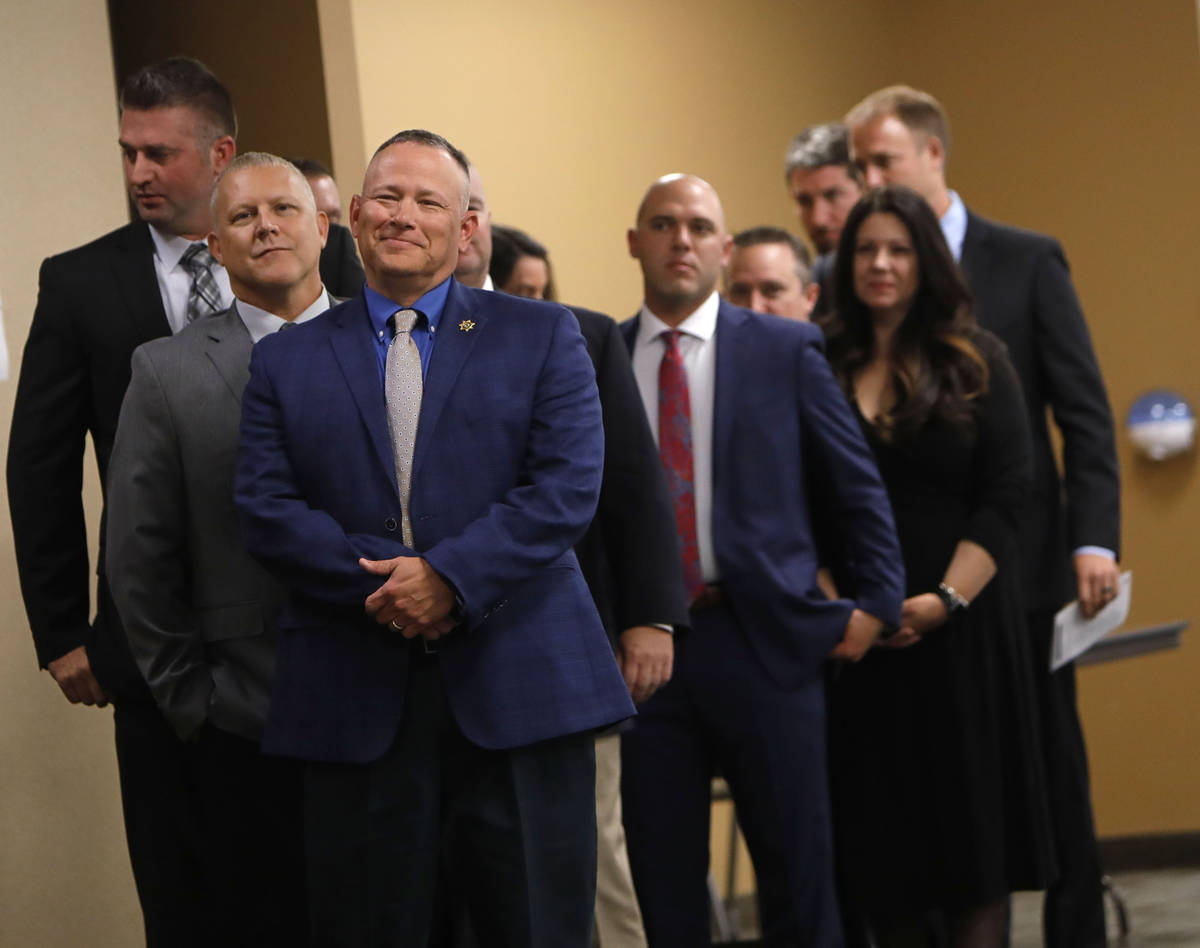 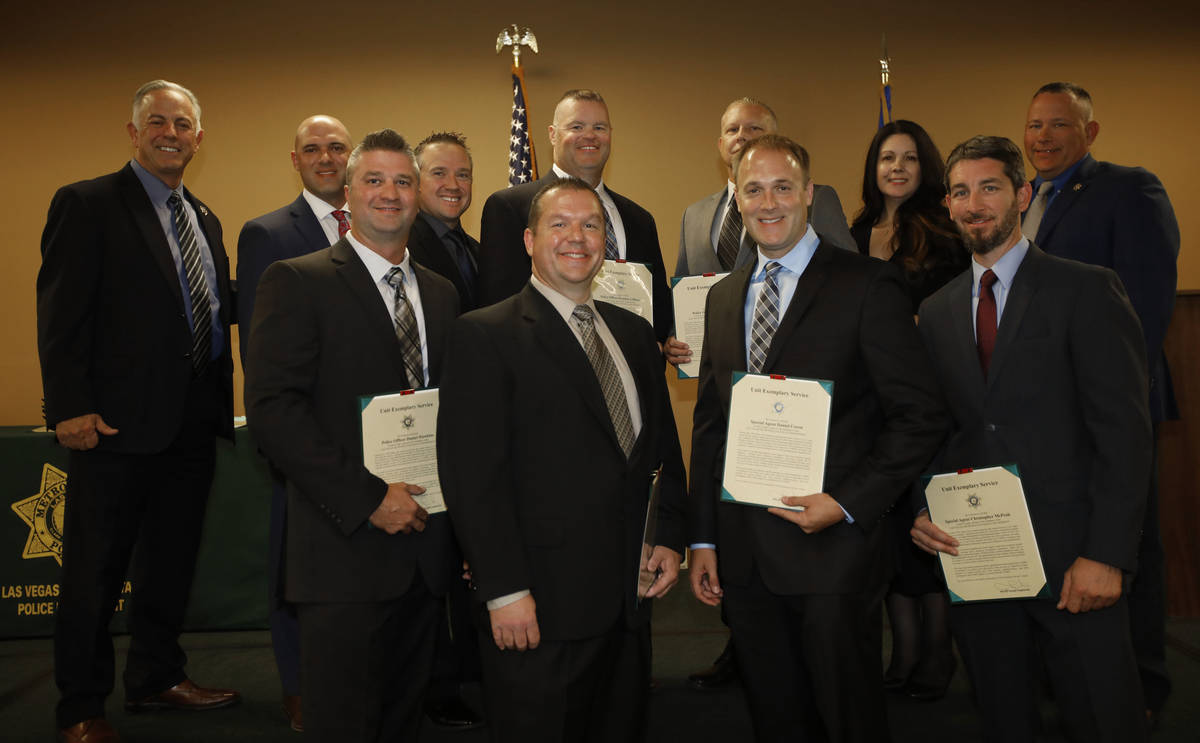 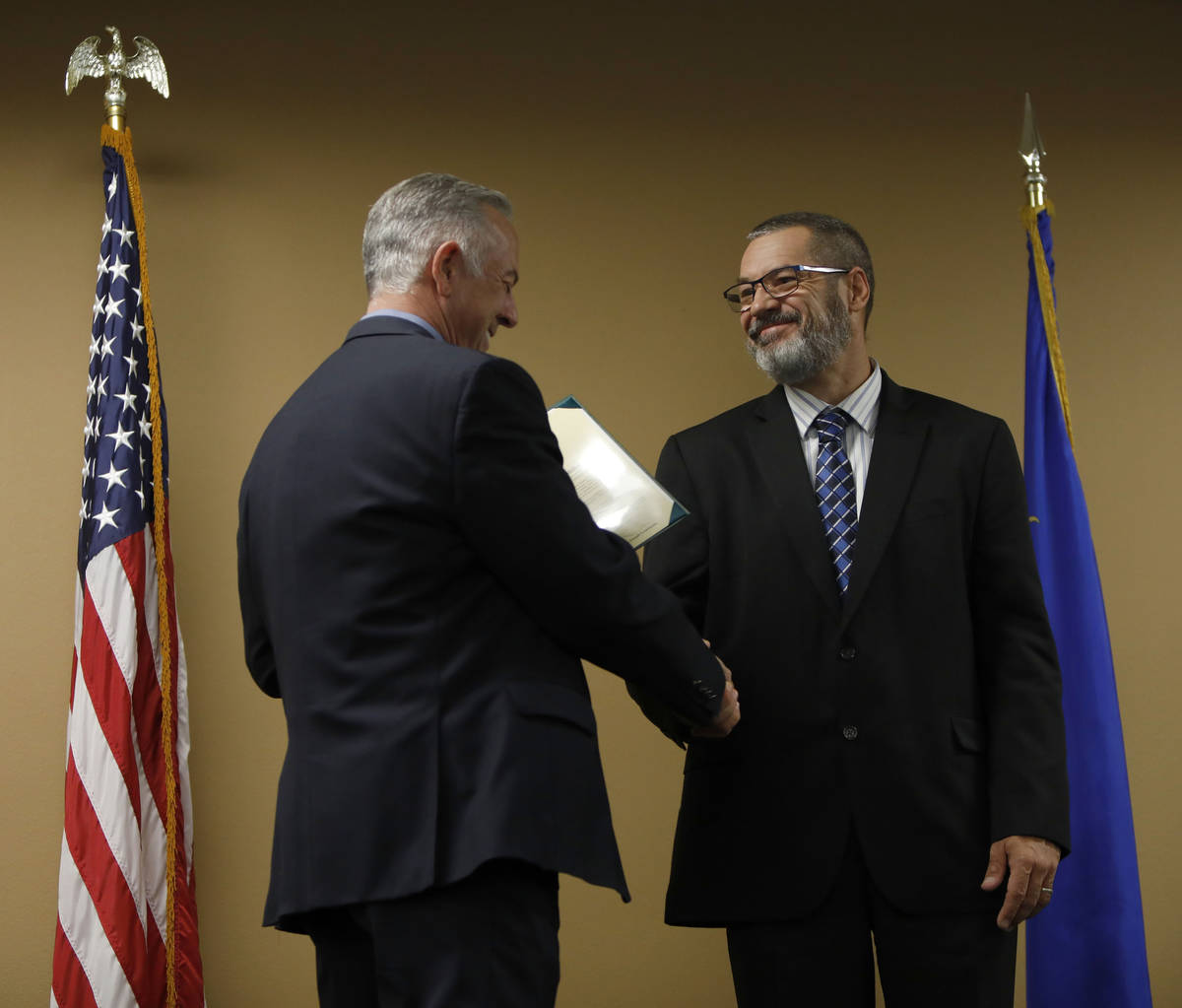 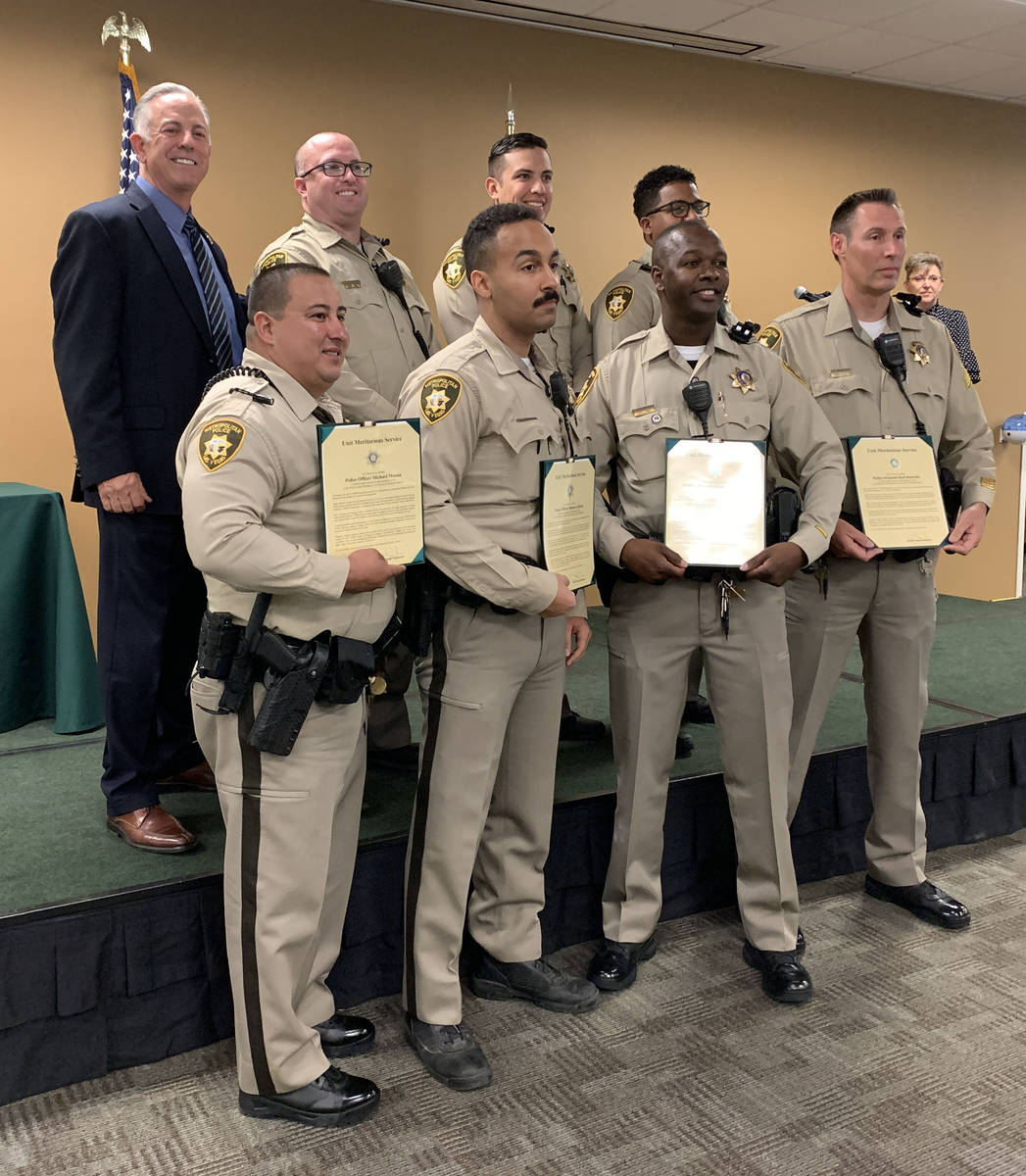 Clark County Sheriff Joe Lombardo, background left, poses for a photo with the recipients of unit meritorious service awards for the case of a baby thrown from the balcony during a Metropolitan Police Department award ceremony at Metro Headquarters in Las Vegas, Wednesday, June 9, 2021. (Chitose Suzuki / Las Vegas Review-Journal) @chitosephoto 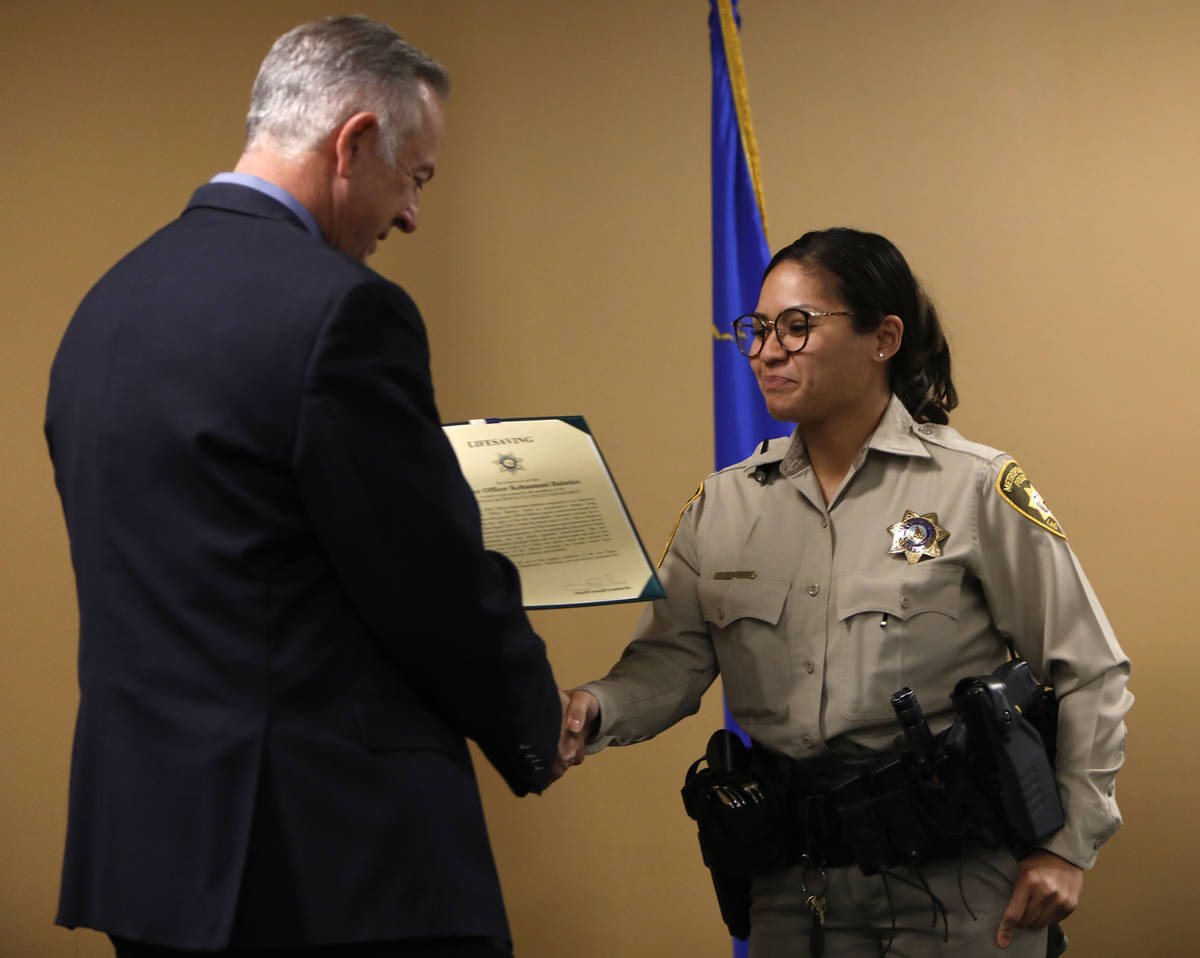 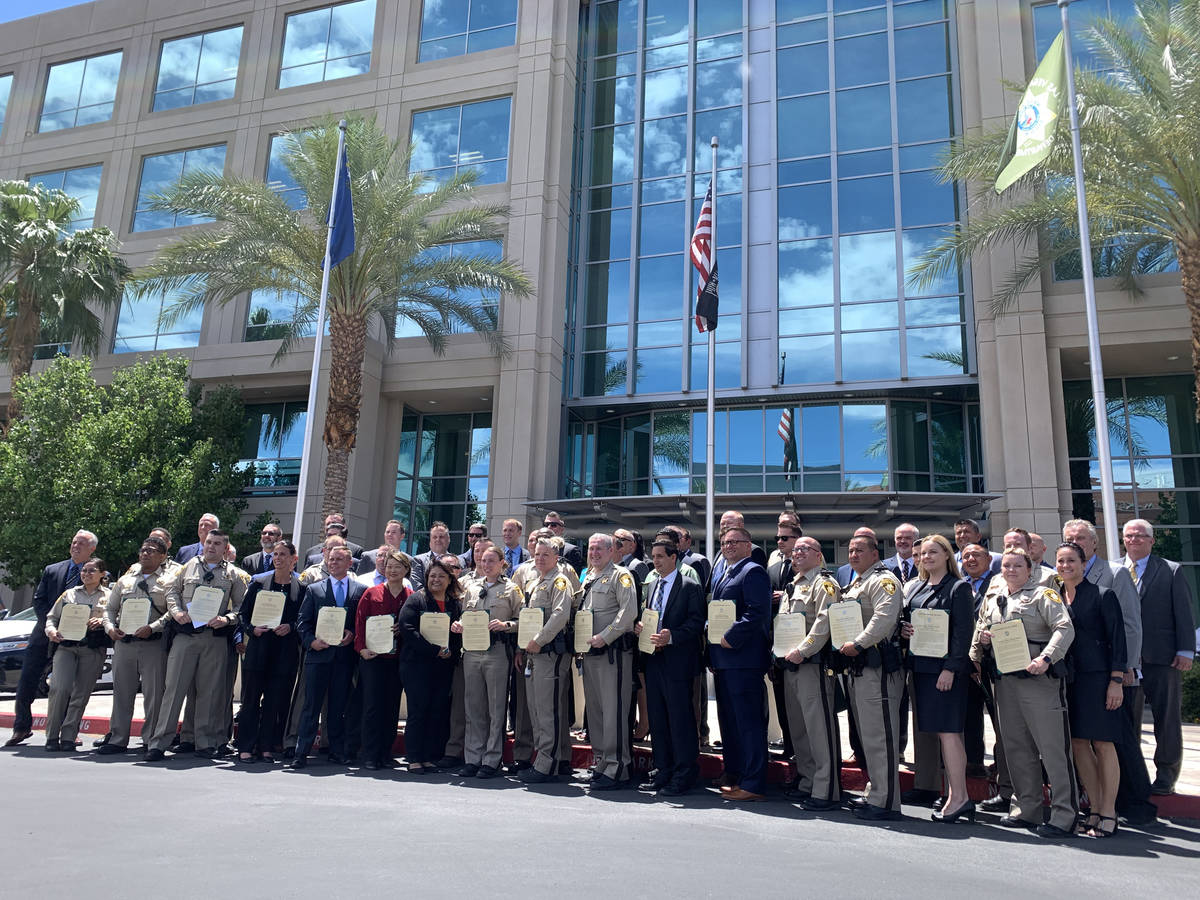 Las Vegas police officer Christopher Allen and his father were reeling in fish at Lake Mead National Recreation Area when they suddenly heard screams from a nearby family.

The family’s vehicle had begun to roll down a steep hill on the edge of the lake and, in the process, run over a 3-year-old girl’s leg.

“We both jumped in the water because we figured the vehicle was going to completely go in, but it luckily stopped,” said Allen, remembering last year’s Fourth of July weekend.

The two men quickly sprung into action, with father Chris Allen tending to the girl’s leg and son Christopher Allen jumping into the vehicle to remove her older sister. After applying a tourniquet to the 3-year-old’s leg, the father and son waited for the fire department and a helicopter to arrive as they kept family calm.

Without their actions, the girl may have died of a compound leg fracture, Metropolitan Police Department spokeswoman Jaime Ioos said. Officer Christopher Allen was one of the 56 employees that the department awarded for acts of “bravery and excellence” during a ceremony Wednesday afternoon.

Chris Allen, a retired Clark County volunteer firefighter, received the only citizen award given out.

“We can see helping is a family trait,” Ioos said.

The father and son said they kept in touch with the family in the weeks after the injury and reported that the girl was doing well post-surgery.

“She was learning to walk again and going through rehabilitation to get back on her feet,” Chris Allen said.

Held every few months, Wednesday’s ceremony was the first open to family and friends since the start of the COVID-19 pandemic. The awards highlighted community service, exemplary service and lifesaving efforts.

“I appreciate everyone coming today because that makes it even better,” Clark County Sheriff Joe Lombardo said.

Other awards were given out to a group of officers who tracked down a suspect after he threw a 2-month-old baby off a balcony and started a fire. Officers who apprehended domestic terrorists planning to attack officers with Molotov cocktails were also honored, with officers who arrested a suspect before he could use a firearm outside a Strip casino.

Officer Kehaunani Balatico received one of two lifesaving awards given for providing CPR to an unresponsive woman that police said probably would have died without intervention.

The coins are given out for extraordinary actions and serve as “a reminder to always do what’s right,” Christopher Allen said.

Chris Allen plans on adding the coin to his collection. Three years ago, he received one from a Spring Valley Area Command police sergeant for his part in raising Christopher Allen. 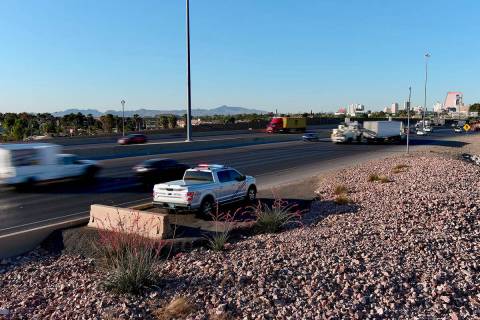 The use of artificial intelligence to strategically position law enforcement vehicles on Las Vegas’ busiest highways appears to have had some initial success in reducing dangerous driving. 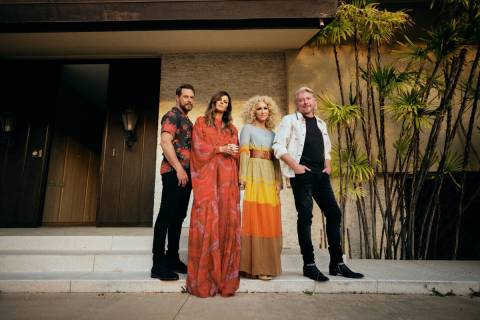 Lady A plays The Theater at Virgin Hotels Las Vegas in September. The band previously headlined as Lady Antebelllum at the Pearl in 2018.

Justin Bieber is performing in July, and Ben Affleck has been directing a new movie from Wynn Las Vegas. 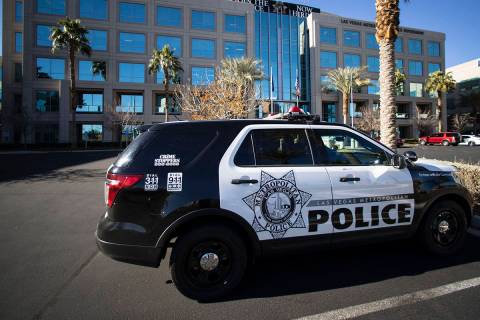 The crash between a Cadillac STS and Volkswagen Jetta occurred just before 11 a.m.

The long-planned $4.3 billion property could bring more tourists to the north Strip and a surge of visitors overall to Las Vegas.

Forced to take most of its programming online by the pandemic, Blindconnect found innovative ways to remotely offer Braille and cooking classes. 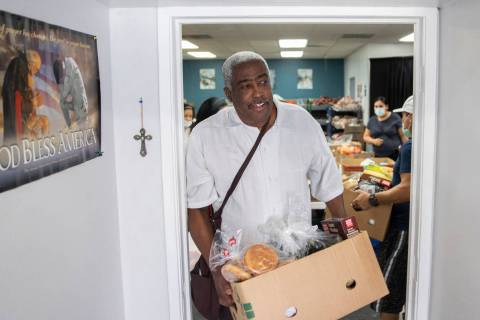 Demand at Southern Nevada food pantries has stabilized from a shocking peak more than a year ago, but Three Square food bank is still distributing over 1 million more pounds of food a month than it did in May 2019.