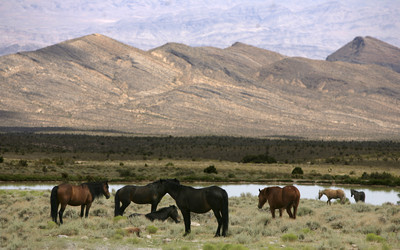 Instead of gathering free-roaming wild horses in Southern Nevada this weekend, Bureau of Land Management officials will attend a gathering of wild horse advocates to discuss what can be done to keep horses and burros crowding Western ranges from being killed by lethal injections.

That’s what will probably happen, a BLM spokesman said, if the herds can’t be kept in balance with the environment where they live while costly facilities to hold those captured are at capacity and adoption outlets are saturated.

"Because we have the legal authority to euthanize excess horses and burros, we’re saying we have to consider these alternatives because there is no indication our budget is going to go up in any substantial degree," said Tom Gorey, the BLM’s spokesman in Washington, D.C., on wild horse issues.

Government cowboys have left 29,500 free-roaming wild horses on the ranges along with 3,500 wild burros. About half those animals, roughly 16,000, are in Nevada.

"Herds double in size every four years," Gorey said. "If we just let the population breed without removals we would see ecological damage from overpopulation. They’d eat themselves literally out of house and home. There would be malnutrition and death if we let the situation go out of control."

Soaring costs for hay and transportation have raised the price to keep horses in holding facilities. There are about 22,000 in long-term pastures in Oklahoma, Kansas and South Dakota, and 8,000 more in short-term facilities in the West.

The budget crisis makes it unlikely that the $37 million the BLM spends on wild horse and burro management will increase substantially, he said. The cost alone for holding horses in captivity is more than $27 million of the budget. Those costs are projected to increase by 2012, requiring $77 million for the entire program of which $57 million would be spent to maintain animals in holding facilities.

That’s why the BLM is considering euthanasia by lethal injection or even shooting some horses that have been rejected from adoption. Euthanasia was suspended in 1982 after public outcry.

And, with no magical solution from experimental birth control methods in the near future, there is no choice but to revisit the euthanasia option, Gorey said.

Not so, said Karen Sussman, president of the International Society for the Protection of Mustangs and Burros, a non-profit group that is hosting the 2008 Wild Horse and Burro Summit with other wild horse advocates today and Sunday at the South Point.

"Basically we want to look at BLM managing to preserve and protect the herd as mandated by law, rather than eliminating them as they’ve been doing the last eight years," she said in a telephone call from the society’s headquarters in Lantry, S.D.

One option is that stallions can be gelded and returned to the range along with mares.

"There’s no reason they can’t put non-breeding horses back out there. That would be of no cost to the BLM because they manage the public range lands," Sussman said.

She noted there are about 100 herd areas that the BLM designated for horses in the 1971 Free-Roaming Wild Horse and Burro Act. On much of that land, horses and burros face competition from cattle.

Sussman said, "We’re at a crossroads right now. There’s only 27,000 (wild horses) on Western range lands in 10 Western states. They represent one-half of 1 percent of all the livestock and wildlife on public range land. That’s not very much," Sussman said.

"We have half the number of horses now than when the law passed in 1971," she said.

In Sussman’s view, the BLM should have forged ahead with demonstrating fertility control at least to keep pace with success the National Park Service has experienced instead of sinking most of its money into rounding up horses.

Furthermore, she said, the "BLM has hardly spent a dime on studying behavior of wild horses. … You can’t disrupt the band every three years and expect to have healthy horses out there.

"Every time BLM goes in to do a gather, they destroy those strong family bonds wild horses have," she said.