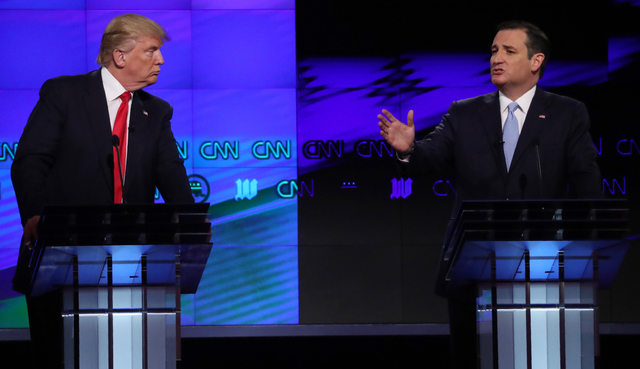 Donald Trump listens to rival Ted Cruz during one of the Republican candidate debates sponsored by CNN. (Carlo Allegri/Reuters)

PHOENIX — Arizona Republicans are headed to Mesa on Saturday for the state party convention, where they’ll elect 55 of 58 delegates to the national GOP convention.

Those delegates will be bound to vote for businessman Donald Trump as the party’s presidential candidate on the first ballot because he beat Ted Cruz and John Kasich in the state’s March 22 presidential primary.

But that doesn’t mean there won’t be a fight — far from it.

The battle is over whether the delegate slates from the Trump or Cruz camps win the day at the daylong convention. Weeks of wrangling among Republican insiders have set the stage for a state convention fight that Cruz supporters hope helps keep their candidate in the mix if Trump doesn’t collect the 1,237 delegates across the nation he needs to win outright.

Cruz supporters have been working to get his delegates elected to the state convention during legislative and congressional district meetings in recent weeks. Trump backers have been incensed at what they call maneuvering by the Texas senator’s backers to “pack” the convention.

“We’re doing our due diligence,” Livingston said in a recent interview. “I think it would be insane not to be having plan A, plan B and plan C.”

Former Arizona Gov. Jan Brewer sees it differently. A Trump backer, she said Friday that voters will rightfully be incensed if Trump doesn’t win the nomination in Cleveland in July because of maneuvering at state conventions.

“It would be a huge disappointment across the country, an affront to registered Republican voters who voted and brought Donald Trump in with the populist vote.” Brewer told The Associated Press. “And if that happens, their vote didn’t count.”

Constantine Querard, who is running Cruz’s Arizona operations, said that’s not the way the system works.

“Both campaigns know that winning the primary election gets you those delegates on the first ballot, and what we’re doing now is all about any ballots that come after that,” Querard said. “Everybody is taking it very seriously.”