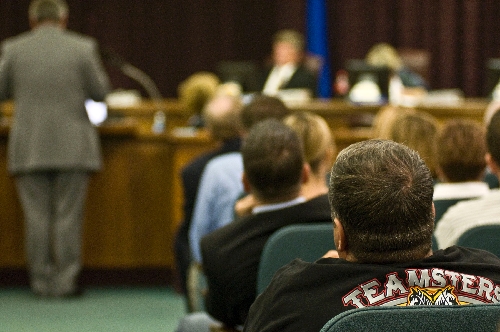 For the second time this year, gloomy North Las Vegas budget talks were interrupted by a power outage, leaving the City Council and its chambers in darkness.

The latest round of heavy-handed symbolism hit the cash-strapped city Wednesday evening just as the acting city manager was getting close to finishing a dreary presentation that included the news that 251 jobs might be eliminated if the city and its employee unions don’t agree on cost-saving measures. Most city departments, including police and fire, would be affected.

The special City Council meeting had to be cut short because of the power outage, and the regular council meeting later Wednesday was canceled.

Fire Chief Al Gillespie ordered an evacuation of the hundreds of people — including many North Las Vegas employees — who had packed the chambers to hear the city’s latest financial news. Most immediately raced to their cars in the heavy rain, while council members remained inside the building.

“Seeing the severity of it all, how much it will impact services to our citizens. It’s pretty scary,” Wood said.

Al Noyola, the city’s acting director of administrative services, had delivered a bit of good news early in the meeting. Because revenues have been coming in at higher-than-expected rates and the city has cut expenses, North Las Vegas’ projected budget shortfall through fiscal year 2011 has shrunk in recent months from an estimated $52 million to about $35 million.

The potential job cuts, in other words, could have been worse.

“We have made substantial improvements,” Noyola said.

City officials have been meeting with representatives of police, fire and Teamsters unions in an effort to save jobs, and City Council members have been publicly pleading with the unions to agree to concessions.

“I get very frustrated because (the unions) are in control of making this thing completely turn around,” Councilman Richard Cherchio said.

The city won’t discuss the details of talks while they are under way, but union representatives said discussions are going well and they expect to soon come to agreements that will save jobs.

Maryann Ustick, acting city manager for North Las Vegas, said some of the 251 positions that could be eliminated are already vacant, meaning that closer to 200 people would be in danger of losing their jobs. Those include 33 firefighters and 11 police officers.

“Our guys are committed to making sure that doesn’t happen,” said Mike Yarter, vice president of the police union, who said the union is on the brink of an agreement with the city.

The city’s largest employee union, the Teamsters, has been meeting with the city all week and also is “very close” to coming to an agreement, said Steve Harney, the union’s vice president.

The Teamsters represent about 800 North Las Vegas employees in a variety of jobs ranging from secretaries to managers.

Jeff Hurley, president of the city’s firefighters union, also said he expects to reach an agreement with the city any day.

The city also plans to combine some departments and reduce services to save money. The new SkyView Multi-Generational Center will not open, and sports programming will be reduced by 50 percent, Ustick said.

The “budget reduction plan” presented Wednesday is preliminary. The council will vote on a final plan in November.

The city laid off 188 employees in June. Another 44 — all North Las Vegas Detention Center workers — were let go this month after the detention center lost about a third of its inmates to a facility for federal inmates in Pahrump. The city has about 1,800 employees.