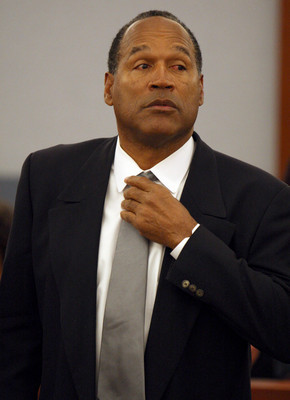 Co-defendant Clarence “C.J.” Stewart filed the same motion, saying the jury foreman failed to reveal his bias against the former NFL star because of his acquittal on double-murder charges in Los Angeles 13 years ago.

On Oct. 3 the jury convicted Simpson, 61, and Stewart, 54, on first-degree kidnapping, armed robbery and other charges in connection with the September 2007 holdup of two sports memorabilia dealers at Palace Station.

Friday’s motions are considered a formality and were expected to be denied by Glass.

Lawyers for both defendants have said they will appeal the convictions to the Nevada Supreme Court after sentencing.

Hearings on both motions were scheduled for later this month, but they probably will be rescheduled because Glass will be on vacation, a court spokesman said.

Simpson lawyer Gabriel Grasso cited seven reasons to grant a new trial, including the removal of two black potential jurors during jury selection. Prosecutors said the removals were not based on the jurors’ race and outlined their reasons, but Grasso said those reasons were insufficient.

He also challenged Glass’ decision to limit questioning of potential jurors about their feelings about Simpson and his 1995 acquittal.

In his motion, Stewart made a similar argument, saying the restricted juror questioning prevented lawyers from uncovering bias in the jury pool.

Stewart lawyer Brent Bryson wrote that jury foreman Paul Connelly said in his juror questionnaire that he agreed with the 1995 verdict and that, “He (Simpson) was tried and acquitted. That is a separate issue.”

But in a news conference after the verdict, Connelly said he thought Simpson should have gotten a life sentence 13 years ago, according to the motion.

Simpson’s motion also said Glass erred in limiting questions of prosecution witnesses that could have challenged their credibility.

He also cited problems with the jury instructions and a lack of evidence to support the first-degree kidnapping conviction.