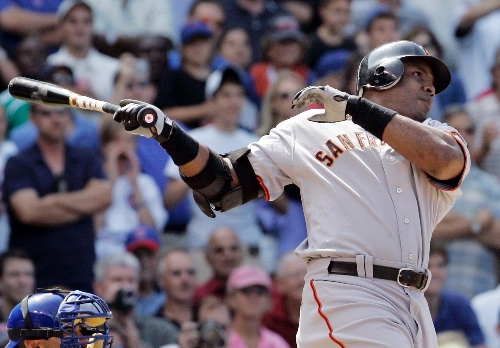 NEW YORK – There’s a chance the podium under the chandeliers in the gold-and-ivory-colored Vanderbilt Room of the Waldorf Astoria Hotel will go unused.

With the cloud of steroids shrouding the candidacies of Barry Bonds, Roger Clemens and others, baseball writers may fail for the only the second time in more than four decades to elect anyone to the Hall of Fame, rendering a news conference unnecessary.

About 600 people are eligible to vote in the Baseball Writers’ Association of America election, all members of the organization for 10 consecutive years at any point. Results will be announced today, with the focus on first-time eligibles that include Bonds, baseball’s only seven-time Most Valuable Player, and Clemens, the only seven-time Cy Young Award winner.

Since 1965, the only years the writers did not elect a candidate were when Yogi Berra topped the 1971 ballot at 67 percent and when Phil Niekro headed the 1996 ballot at 68 percent. Both were chosen the following years.

“It really would be a shame, especially since the other people going in this year are not among the living, which will make for a rather strange ceremony,” said the San Francisco Chronicle’s Susan Slusser, president of the BBWAA.

Three inductees were chosen last month by the 16-member panel considering individuals from the era before integration in 1946: Yankees owner Jacob Ruppert, umpire Hank O’Day and barehanded catcher Deacon White. They will be enshrined during a ceremony at Cooperstown on July 28.

Also on the ballot for the first time are Sammy Sosa and Mike Piazza, power hitters whose statistics have been questioned because of the Steroids Era, and Craig Biggio, 20th on the career list with 3,060 hits – all for the Houston Astros. Curt Schilling, 11-2 with a 2.23 ERA in postseason play, is another ballot rookie.

The Hall is prepared to have a news conference Thursday with any electees. Or to not have one.

Biggio wasn’t sure whether the controversy over this year’s ballot would keep all candidates out.

“All I know is that for this organization I did everything they ever asked me to do and I’m proud about it, so hopefully the writers feel strongly, they liked what they saw, and we’ll see what happens,” Biggio said Nov. 28, the day the ballot was announced.

Jane Forbes Clark, the Hall’s chairman, said last year she was not troubled by voters weighing how to evaluate players in the era of performance-enhancing drugs.

“I think the museum is very comfortable with the decisions that the baseball writers make,” she said. “And so it’s not a bad debate, by any means.”

Bonds has denied knowingly using performance-enhancing drugs and was convicted of one count of obstruction of justice for giving an evasive answer in 2003 to a grand jury investigating PEDs. Clemens was acquitted of perjury charges stemming from congressional testimony during which he denied using PEDs.

Sosa, who finished with 609 home runs, was among those who tested positive in MLB’s 2003 anonymous survey, The New York Times reported in 2009. He told a congressional committee in 2005 that he never took illegal performance-enhancing drugs.

The BBWAA election rules say “voting shall be based upon the player’s record, playing ability, integrity, sportsmanship, character, and contributions to the team(s) on which the player played.”

When The Associated Press surveyed 112 eligible voters in late November, Bonds received 45 percent support among voters who expressed an opinion, Clemens 43 percent and Sosa 18 percent. The Baseball Think Factory website compiled votes by writers who made their opinions public and with 142 ballots had everyone falling short. Biggio was at 69 percent, followed by Morris (63), Raines (62), Bagwell (61), Piazza (59), Clemens (43) and Bonds (43).

Morris finished second last year when Barry Larkin was elected and is in his 14th and next-to-last year of eligibility. He could become the player with the highest percentage of the vote who is not in the Hall, a mark currently held by Gil Hodges at 63 percent in 1983.

The ace of three World Series winners, Morris finished with 254 victories and was the winningest pitcher of the 1980s. His 3.90 ERA, however, is higher than that of any Hall of Famer. Morris will be joined on next year’s ballot by Las Vegan Greg Maddux and Tom Glavine, both 300-game winners.