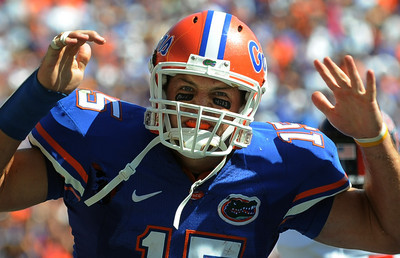 Expectations were as high as possible for Florida junior quarterback Tim Tebow this season. As a returning Heisman Trophy winner, that’s no surprise.

But the Gators were stunned two weeks ago in “The Swamp,” falling to Mississippi 31-30 as 23-point favorites. An emotional Tebow took responsibility for the loss.

Florida still can reach the Bowl Championship Series title game if it can run the table in the Southeastern Conference. It will be no easy task, and the next challenge comes today from Louisiana State.

Expect Tebow to play one of his better games as the Gators cover as 6-point home favorites.

A night game at Florida never is an easy proposition, something Tigers quarterback Jarrett Lee will find out in his first road start.

Gators coach Urban Meyer is 22-2 straight up at home, and 21 of those wins were by seven points or more.

Other selections for today’s games (home team in CAPS):

• Iowa (-51/2) over INDIANA: The Hoosiers managed just 10 first downs and seven points in a loss at Minnesota last week. The Hawkeyes also have lost three straight games but by a total of only nine points.

Iowa has lost two in a row to Indiana, but look for the Hawkeyes, behind quarterback Ricky Stanzi and running back Shonn Greene, to break two losing streaks and get the cover on the road.

• Oklahoma (-6) over Texas: The Sooners have dominated the Red River Rivalry in Dallas the past nine years, with Oklahoma coach Bob Stoops going 6-3 against Texas’ Mack Brown.

Both teams have crushed their opponents, but the Sooners have played better competition while throttling Cincinnati and Texas Christian. A concern for the Longhorns is that their leading rusher is quarterback Colt McCoy.

• South Carolina (-21/2) over KENTUCKY: The Gamecocks have won three straight, and coach Steve Spurrier is 3-0 against the Wildcats. Each team ranks in the nation’s top 20 in defense, but South Carolina, led by quarterback Chris Smelley, has the edge on offense.

• Rutgers (+71/2) over CINCINNATI: The Bearcats are down to their third-string quarterback, redshirt freshman Chazz Anderson. Expect Scarlet Knights coach Greg Schiano, who’s also the defensive coordinator, to mix up the defense and build on last week’s solid showing against West Virginia.

• Colorado (+14) over KANSAS: The Buffaloes missed three first-half field goals in their loss to Texas last week. Kansas needed to rally from a 20-0 halftime deficit to squeak by Iowa State, 35-33. Look for Colorado to hang close and stay within the number.

• Penn State (-51/2) over WISCONSIN: The Nittany Lions have been the Big Ten’s most impressive team. The offense is balanced, led by quarterback Daryll Clark and running back Evan Royster, and the defense leads the league in stopping the run.

The Badgers are reeling from a second straight Big Ten loss. The only good news for them is their band will be allowed to play after serving a one-game suspension.

• SOUTHERN MISSISSIPPI (+11) over Boise State: The Broncos have proved to be a monster at home on the blue turf but vulnerable on the road. Boise State now is the hunted as it goes on the road as a double-digit favorite. Running back Damion Fletcher, who rushed for 260 yards last week, leads Southern Mississippi’s explosive offense.

Last week: 1-6 against the spread

Barry Holthaus, a handicapper for VegasInsider.com, is providing college football analysis for the Review-Journal this season. He can be heard on the Leroy’s Sports Hour at 10 p.m. Saturdays on KLAV-AM (1230).