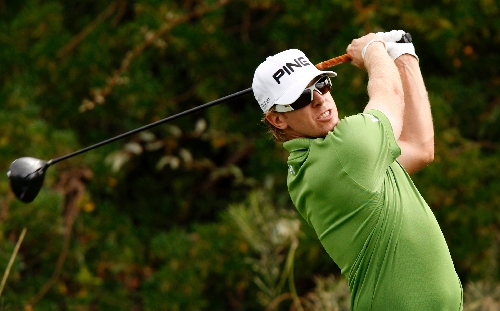 Despite being a late-season PGA Tour event, the Justin Timberlake Shriners Hospitals for Children Open has attracted enough quality players to make things interesting this weekend at TPC Summerlin.

There is also the usual array of bubble players hoping to earn big enough paychecks to crack the top 125 on the money list and keep their PGA Tour cards.

When last seen on a golf course, Mahan was stubbing his chip shot at the 17th hole at Celtic Manor in a final-match loss to Graeme McDowell that allowed the Europeans to reclaim the Ryder Cup.

Mahan has had three weeks to put that behind him and figures to be fired up as he returns to work.

"I’m ready to go," Mahan said. "The time off really helped, and I’ve put what happened at the Ryder Cup behind me. It was over as soon as the handshake.

"There’s a lot of really good players here, and there’s going to be a lot of great golf this week."

Nick Watney, who lives in Henderson near Rio Secco Golf Club and is No. 29 on the money list with $2,387,289, hopes to build on his three top-10 finishes this year.

"I’ve played consistently well, but winning is how you judge your year," said Watney, whose best finish this year was a fourth-place tie at the Tour Championship last month. "In that respect, I’m disappointed. But I’ve been working hard at the end of the year, and I think my game’s in good enough shape that I can win here."

With nine players in the field who have already won this year, there’s a good chance the streak of six straight first-time champions could end. Defending champion Martin Laird has played well down the stretch and would like nothing better than to duplicate Jim Furyk’s feat of back-to-back Las Vegas victories, in 1998 and 1999.

"It’s a little different circumstance for me coming back as defending champion and not having to play for my card like I have the last two years coming here," Laird said. "So that makes it even nicer, just kind of come in here and relax. Hopefully I can be out there again on Sunday and, who knows, end that streak of firstu2011time winners."

Then there’s Woody Austin, Aron Price, Briny Baird and Bob Estes. They rank Nos. 125 through 128 on the money list and will be fighting to retain their PGA Tour playing privileges.

But they will probably play a secondary role to young guns Mahan and Fowler, who figure to draw the largest galleries beginning with today’s opening round.

Fowler is a 12-1 betting favorite even though he’s never won on the PGA Tour.

"It’s wide open," Mahan said. "I think with the rain softening up the course, you’re going to see scores in the mid-20s and a lot of guys are going to be firing at the pins."

■ NOTES — Anthony Kim withdrew Wednesday and was replaced by Chris DiMarco. No reason was given for Kim’s decision to drop out. … The weather forced Wednesday’s pro-am to be reduced from 18 to nine holes. The winning team was pro Mark Wilson’s at 11-under-par 25. Wilson played with Bill Devine, David Faulkner and Tom DeNoma. … Among the six former UNLV players participating is Eddie Olson, who graduated in May and was given a sponsor’s exemption. Olson is making his PGA Tour debut today and tees off with the final group from the No. 1 tee at 1:05 p.m.