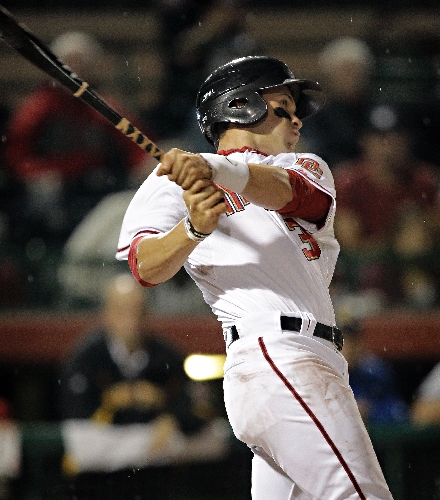 SCOTTSDALE, Ariz. — The ball arching toward the wall in left field, the crowd rose to its feet, anticipating a home run that was too good to be true.

Turned out it was, even for Bryce Harper.

Still, not a bad start for the highly hyped phenom.

Harper just missed a grand slam in his Arizona Fall League debut Wednesday night, ending up with a still-impressive two-run double, for the Scottsdale Scorpions at the spring home of the San Francisco Giants.

The 18-year-old Washington Nationals prospect finished 1-for-4 with two RBIs, getting an ooh-then-ahh reaction from the crowd with his near slam in his final at-bat in the seventh inning of a 6-3 win.

“It was a lot of fun to come out here and step my game up a little bit and face that kind of pitching,” said Harper, a former Las Vegas High School and College of Southern Nevada star. “Got a few pitches that I could drive, and I did what I did.”

A member of Scottsdale’s taxi squad, Harper can play only on Wednesdays and Saturdays, so he spent Tuesday’s game eagerly watching from the steps of the dugout. A larger-than-usual crowd showed up for his debut, scattering around the stands at Scottsdale Stadium to watch him start in right field and hit seventh for the hometown Scorpions.

A converted catcher, Harper had one hard-hit ball sail over his head for a double in the first inning but made two routine plays after that. His forte is hitting, though, and he had an impressive debut.

Harper opened with a high popout to shortstop on the first pitch he saw from Philadelphia Phillies prospect Josh Zeid.

Harper got the barrel on an 0-2 pitch from Zeid in the fourth inning, but his liner went right to Mesa center fielder Jeremy Moore.

He hit it hard again on an inside-out swing in the sixth inning, and this time it went right to third baseman Josh Vitters for an easy putout.

The small crowd that stuck around for Harper’s final at-bat got a treat, when he lifted a ball that sailed over the left fielder’s head and caromed over the wall for a two-run double that put the Scorpions up 6-2. Harper was greeted with a mini-ovation when the umpire signaled ground-rule double and sent him back to second.

He started his professional career in the Florida Instructional League, where he hit .319 and led the team in hits and homers. The Arizona Fall League represented a step up in competition; he’s the second youngest ever to play in the league filled with players who have already played one or more years professionally.

“To be able to play two times a week, I’ll try to take as many hacks as I can,” Harper said.