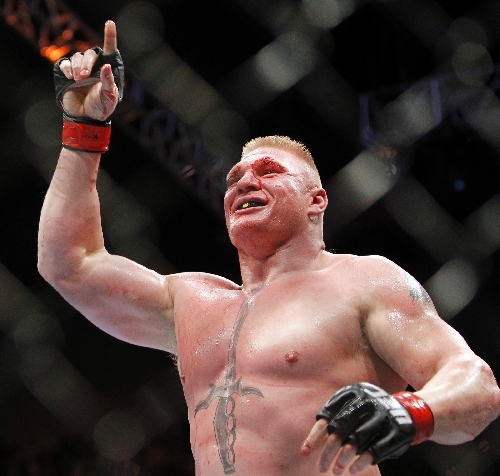 LOS ANGELES — A kinder, gentler Brock Lesnar seemed to emerge in July when the Ultimate Fighting Championship heavyweight star returned from a year away from action mostly because of a career-threatening bout with diverticulitis.

Lesnar was friendly, funny and accommodating — traits not often associated with the normally abrasive former professional wrestler turned mixed martial artist — before and after his successful title defense against Shane Carwin in Las Vegas.

Lesnar appears to be trying to maintain the more lighthearted nature as he prepares to defend the belt against rising star Cain Velasquez in the main event of UFC 121 on Saturday in Anaheim, Calif.

He even was sporting a new look to go with his new attitude Wednesday as he fielded questions at a news conference with a thick, full beard.

“I finally just hit puberty, and I wanted to try it out and see if I could actually grow one,” he said jokingly of the facial hair, which he said will remain for the fight. “It’s winter time. I’m going hunting (after the fight), and I’m proud to be from Minnesota. It’s that time of the year. We just grow beards.”

Lesnar points to his illness and the fear of possibly having his career taken away for his fresh outlook and said he visited his doctor after the Carwin fight and again got a clean bill of health in his recovery from the intestinal infection.

“I’m very thankful to be able to fight,” he said. “To be able to go out and compete twice in one year coming from where I was a year ago at this time, I’m excited. I’ve always been excited to fight, but it’s a great thing.”

Lesnar, 33, also expressed gratitude for the mixed martial arts organization that has made him a legitimate star. After a superb collegiate wrestling career that included a national title, he was internationally known as a star of the scripted World Wrestling Entertainment before an ill-fated attempt to make the Minnesota Vikings.

Now, he is the UFC’s heavyweight champion and relishes the chance to compete. Lesnar, who dismissed the notion that Velasquez would be his toughest opponent, said it’s important to him to strive to be the best.

“I don’t have to pry myself out of bed in the morning. I try to be the first one at the gym,” Lesnar said. “I’m so thankful and glad there is a (UFC) because I don’t know what I’d be doing with myself.”

He also might feel grateful to still have the title.

Against Carwin, Lesnar was knocked down early and took a pounding for nearly the entire first round. The referee looked as if he might stop the fight on several occasions, but Lesnar survived the onslaught and finished Carwin in the second round to retain the title.

“You can look at that both ways. Shane got the upper hand and got on top of me, or you can look at it as I took a good punch and ended up on the ground and got back up and won the fight, and that’s the way I look at it,” Lesnar said. “It built a lot of character, I think.”

Perhaps the struggles with Carwin’s striking early in the fight led Lesnar to bring Pat Barry, one of the UFC’s top standup fighters, into his training camp to help prepare for the quicker striking game of the smaller Velasquez.

Barry, like most who participate in a Lesnar camp, could not comment on the heavyweight champion or anything about their work together.

It’s a common refrain from those close to Lesnar, who greatly values privacy.

Lesnar said he does all he can to maintain the simple life he has carved out for himself, his wife and children in Minnesota.