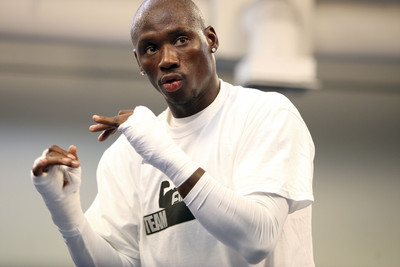 The Barack Obama and John McCain camps have nothing on Antonio Tarver when it comes to hurling insults.

The light heavyweight champion’s putdowns of Chad Dawson have been nearly nonstop leading up to their IBF-IBO title fight tonight at The Pearl inside the Palms. The bout will be the second half of a Showtime doubleheader with the Samuel Peter-Vitali Klitschko WBC heavyweight title fight in Berlin.

Dawson claims he wanted this fight three years ago, but Tarver, a 2-1 underdog, said Dawson will wish he never accepted the match.

“I truly feel the people haven’t seen the best of me yet,” the 39-year-old Tarver said. “I think Dawson is the type of fighter that will bring that out in me.

“I know what people want. They want to see me in a knockdown, drag-out type of fight, and I’ve been in this game 11 years and I’ve managed to escape that. It’s a proud feat. But sometimes there comes a time where you have to lay it all out on the line.”

Tarver (27-4, 19 knockouts) said his experience and the quality of opponents he has faced — which includes Roy Jones Jr., Bernard Hopkins and Montell Griffin — will be the difference tonight.

Jimmy Williams, Tarver’s 81-year-old trainer, said from a class perspective the matchup is no contest.

“It’s like going to the dog track and you’ve got an ‘A’ dog running against a ‘C’ dog. Who do you think is going to win?” Williams said. “Tarver has fought all the ‘A’ dogs.”

“We’re going to make a hard fight easy,” the trainer said. “Tarver’s one of the greatest defensive fighters ever. This guy has no defense.”

Both fighters are southpaws, but Tarver said “that’s not going to be a problem.”

“I’m one of those rare true southpaws. I do everything left-handed so, for me, this will be easy fighting a southpaw,” the champion said.

Tarver and Dawson each weighed 174 pounds Friday, a pound under the limit.

The fight will bring Tarver a $1 million payday, but he said he’s more concerned about cementing his place in history.

“Every fight is a big-money fight for me because I came from nothing,” the Tampa, Fla., resident said. “This is about solidifying my legacy as one of the all-time great light heavyweights.”