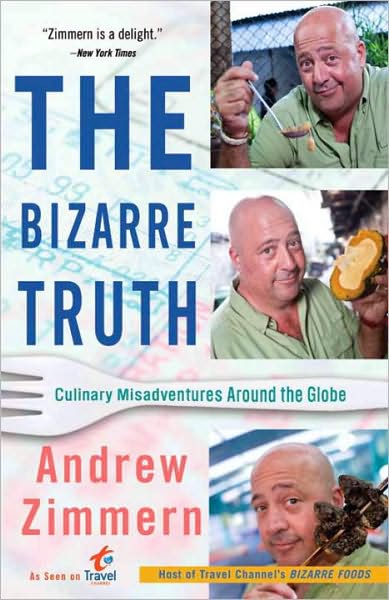 How bizarre is “The Bizarre Truth”? About as bizarre as author Andrew Zimmern’s Travel Channel show, “Bizarre Foods.” And that’s pretty bizarre.

The book is subtitled “Culinary Misadventures Around the Globe” and that’s exactly what this compendium of stories by Zimmern is. Most of us foodies are willing to take a lot of time and go to a lot of trouble — and travel great distances — to find the perfect meal, or the perfect dish, or even something we’ve always wanted to try or haven’t had for many years.

As for Zimmern? Think of him as an extreme foodie, willing to absolutely risk life and limb for an esoteric treat.

For example: puffin hunting in Iceland, which involved piling into an inflatable boat and setting out over open ocean under conditions that left him “expletive expletive-face petrified” to reach a volcanic island — which was created in 1963, making it “freakishly almost exactly as old” as Zimmern — and then leaping out of the moving boat and grabbing a climbing rope, to pull himself up onto the island. He does say he was “gaga” over smoked puffin, so we’ll assume it was worth it.

True to his TV personality, Zimmern comes across as affable and engaging, willing to try anything for a taste — or just the fun involved. But he also sees how much has been and will be lost in our changing world, and so he writes not only about adventure but about a matador who’s trying to save Madrid’s historic tabernas and the man who’s the last person on earth who dives for conch — and who Zimmern refers to as “the last bottle of Coke in the desert.”

The book is colorful, fun and fascinating, even if you’re not a foodie. But oh so much more satisfying if you are.

COMMENTARY: James Dean, a doomed Porsche and homophobia
By Jason Colavito Special to the / RJ

Do we still want to be entertained by made-up old stories that tell us queer people are cursed and deserve to die?

Mob Month is back at the Clark County Library
By F. ANDREW TAYLOR View Staff Writer

For the fifth year the Las Vegas-Clark County Library District is making an offer some people find they can’t refuse. Mob Month is coming back to the Clark County Library, 1401 E. Flamingo Road, with events Tuesday nights in January.

7 ways autocomplete can get smarter

Autocomplete is one of the best (or depending on how hastily you push ‘send’ – worst) things in the world. We rely on it so much that Google plans to let us autocomplete whole emails. Here are seven ways predictive input can improve. 1. Recognizing names from previous emails Jakub Kokoszka has a tough name to […]

Movie posters might soon be based on your clicks

You may have thought you left Blockbuster behind, but the basic way we browse movies hasn’t changed all that much. We peruse poster after poster, kind of like walking the aisles of a ‘90s-era video store. That one poster image, meant to appeal to as many people as possible, is often all we see before […]

The National Association of Broadcasters show kicks off this weekend in Las Vegas.  The show focuses on new and emerging technologies and trends in relation to the media and entertainment industries. As it’s not open to the public, I’ll be at the Las Vegas Convention Center on Saturday, Monday and Wednesday to share some of […]

Friendly Ford celebrated its 47th year in business April 7 with a large crowd that included dignitaries and longtime friends visiting the dealership at 660 N. Decatur Blvd.

If you get called to a board meeting at Lake Las Vegas, you might want to bring your swimsuit. That’s the term Westin at Lake Las Vegas marketing director Matt Boland uses for upright paddleboard races, one of many team-building exercises offered regularly at the resort.

It was a 15-year celebration of The World Poker Tour at Bellagio for the Five Diamond World Poker Classic. The largest field size in WPT Five Diamond’s history was created when 791 entries were tallied, and it was James Romero, 27, of Portland, Oregon, who won his first WPT title.